Every Wednesday of Black History Month I will be featuring stories of everyday heroism that have helped to reshape the world. Whether they be writers, activists, or people who were just fed up, these icons are people I hope you’ll never forget.

I’m ashamed to say I didn’t learn Marsha P. Johnson’s story until recently. In fact, I hadn’t heard about the Stonewall Riots, nor did I know nearly enough about the battles the LGBTQIA Community has had to fight for the basic rights afforded to straight, cis-gendered society. Yet, now that I know her name and  have learned of her work, I will never forget her story.

Marsha P. Johnson was a New York City-based trans woman, drag queen, and sex worker who, in June 1969, fought back against a police raid of the Stonewall Inn, a bar where the LGBTQIA community could gather without fear of persecution. At the time is was illegal for them to be served, but the Stonewall Inn became their safe haven. When the police came, they decided to stand their ground and assert their human rights. Marsha  infamously shouted “I know my rights!” as she threw a shot glass and shattered a mirror. For two two nights Marsha, her friends, and other bar goers resisted.

Following the riots, Marsha and others led gay liberation demonstrations throughout the city. In honor of their work, Pride Week is celebrated in June.

With the aid of Sylvia Rivera, Marsha founded STAR – Street Transvestite* Action Revolutionaries – to protect and house the trans youth, sex workers, and gender non-conforming youth of lower Manhattan. Johnson’s activism would last until her untimely death in 1992. Her case was originally ruled a suicide without further investigation, but in 2012 her death was re-opened to be investigated as a homicide. 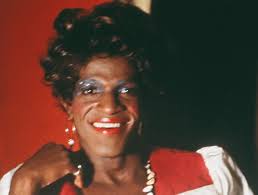 Trans women have an average life expectancy of 35. Thirty-five. That means middle age hits at 17, going on 18. The stakes are even higher if you are a trans woman of color, especially a Black woman. Marsha exceeded the average by 12 years, but I can only imagine what she could have accomplished – beyond the magic she struck in her short life – had she been afforded the same opportunities as the rest of us.

I am not trans. In fact, I am a cis-gendered, straight, able-bodied woman from a middle class family. I went to college. I have privileges that make my life much more comfortable than many others, but I look at Marsha and read her story, and feel a fire. It’s our responsibility as humans to feel that burn, to know her name, to know the struggle and to fight on her behalf. I hope you’ll stand up where you can.

If you would like to learn more about Marsha’s remarkable life and cruel end, The Death and Life of Marsha P. Johnson is available to stream on Netflix.

*Transvestite is an out-of-date term, but was included for accuracy. The correct term today is Trans or Transgender.