Friday Media Prep: My Dad is Still the Greatest Hero

Happy Friday, kids! Today’s post is in honor of the person who was my first hero and the baddest guy on the block, my father. This weekend we’re supposed to be exalting his name, buying expensive and shiny cards, and eating whatever he wants, because Sunday is Father’s Day, but I wouldn’t have a problem bragging about my Pop any day of the week.

My father was 26-years-old when I was born – a kid himself – yet, I think he was born ready to raise babies into halfway decent people. We spent our days together while my mother completed nursing school, playing with Barbies, going to the park, and exploring the world. In fact, most of my traits are mirrors of the behaviors I picked up from him in those early imprinting years; from the way I walk, to how I look, his DNA is ever-present.

My dad’s – and most heroes – greatest strength is his capacity for caring and the bravery to do what is difficult yet right. Over the years I have watched my dad inspire children in his classroom to be whomever the want to be. I’ve seen them return after graduation to hug him, thank him for his ability to make school fun, then go off and achieve their dreams. He’s coached athletes (including my brother) to championships. He’s made young people without an ally feel seen. Then, at the end of his long days, he goes home to be a regular guy and cook for the family he loves.

There’s surely no greater hero than my dad, but I’ve prepared a list of some characters who come mighty close to his standard. Below you’ll find my weekend media recommendations if you’re feeling like you need to get a heroic boost for the upcoming week. Enjoy!

Image via the Hollywood Reporter

It’s an exciting time to be alive, because the stars aligned for us to (finally) get the sequel I’ve personally been dying for – Incredibles 2. Since we might have to accept that a third one won’t be on the horizon for another 300 years, I highly recommend clearing time on your schedule to go see it. We went as a family of adults last night, and it was quite the event. I can safely say 90% of the audience was over 21, yet no one was too caught up in adulthood to sit silently at the best moments. The sequel begins where The Incredibles left us with the family battling the Underminer. From there on it’s a family adventure that the world needs right now. I couldn’t help but laugh at Mr. Incredible’s struggle to maintain the home while his wife, Elastigirl, moves to the fore to fight crime. My dad never let on that being the daytime caregiver was difficult, beyond how much he hated cutting the crust off all my sandwiches. (Honestly? I still hate the crust.) However, in Mr. Incredible’s devotion to be above all things a good father I saw my own. Rest assured that both succeeded.

When my dad was a kid he collected comics like candy. He only had to pay 25 cents to read about Spider-Man’s exploits, or to imagine he was one of the X-Men. Growing up in small town Western Kansas only offers so much entertainment, but with his comicbooks he could imagine he was anywhere else. Sadly, after college he gave away or threw out most of his originals. However, by the time my brother and I came along he’d amassed quite the impressive collection. Let me put it like this: Kevin Smith was able to finance his first film with the proceeds of his comic collection. My dad calculated that he has more. His is a treasure trove of tales that formed many of my favorite childhood memories. I’m quite certain my brother and I can thank the afternoons of reading with my dad for our love of storytelling and adventure. The above comic is Origin, the tale of Wolverine’s life that was unknown to his comrades in the X-Men. I remember when this 6-part series came out, because we were dying to know more about our favorite member of the team. Wolverine was gruff around the edges, yet always seemed loving and misunderstood to me. I got a little of that tough love in my younger years. I highly recommend checking up on this story in your free time. 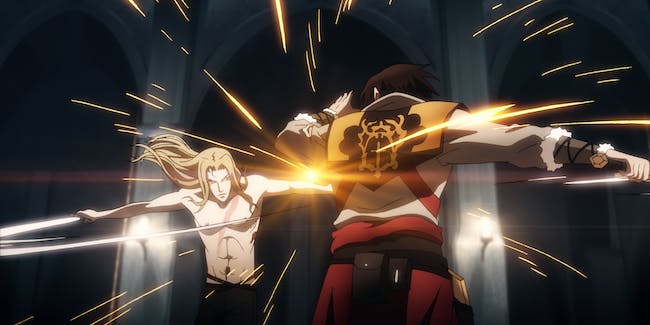 Last, but certainly not least, is the Netflix show Castlevania! We all just discovered this series on the streaming service, and I had no idea it was a video game back in the day. My brother and husband played it when they were kids, but I was too busy being cool and having friends. Luckily, it’s been revived in the form of an animated powerhouse that seriously delivers on the fights and gore. My brother and I were early lovers of anime and East Asian cinema, thanks to my Dad. We regularly snatched up Studio Ghibli films from Blockbuster, tried to imitate Bruce Lee, and desperately waned to be like the Samurai of Kurosawa’s films. Watching Castlevania takes me back to those days of my youth in a delightfully ridiculous way. The show is all about the fight to stop Dracula from destroying Wallachia through his horde of demons. Enter a drunken badass named Trevor, and you’ve got yourself the kind of show anyone could eat up. Season 1 of Castlevania is available to watch in its entirety and it’s only 4 episodes long. You have no excuse to avoid it!

There you have it! I wish I could list more, but then you would be here all day, instead of celebrating the heroes in your life. One of the many things I love about my dad is how he tried to show my brother and I that heroes aren’t one thing. It’s not about your size, gender, sexuality, race, or ability, but about calling on the strength to be good in the face of hardship. My dad isn’t the kind of man who will gravitate naturally to the limelight, but he’s exactly the kind of person who deserves it. Above all things, I hope my dad knows I’ve survived this wild life with a smile due to being imbued with the confidence of his love.

Stay strong out there. Be the hero of your story today.

← A Lesson From Emma Dupree and the Granny Women Who Endure
Back to the Beginning: My Natural Hair Journey →

1 Comments on “Friday Media Prep: My Dad is Still the Greatest Hero”

I'm so honored to have been invited back to my alma mater, Topeka West, to sign a copy of my book! The library was a place where I got to learn, explore, and have fun thanks to the fantastic team there when I was a kid. I never would have thought they'd some day have a copy of something I wrote! Hopefully it falls into the hands of someone who needs the inspiration to keep going.
The pumpkin spice must flow!! 🪱
HERE. Have my extremely rough and technically spotty first short film for school that's a 2 minute long take about writer's block from the perspective of my pen 🎥
This little @newyorkfilmacademy student proves there are no small roles 😉 (Even if the role is just cheering on his mom).
I spent so much time taking care of other people's kids that I thought it made me an expert. Reader: I am not. It's hard and fun and exhausting and illuminating. The best part? I was able to choose whether I wanted it or not. My body is my own, which makes it twice as great! Crazy concept, huh? Support your local Planned Parenthood before they're all gone and we have to ask men if it's ok for us to get mammograms. Anyway, I'm off to get hollered at, then hugged by a miniature person ❤️
The reason why we work so hard for everything, be it security or equality 🐥