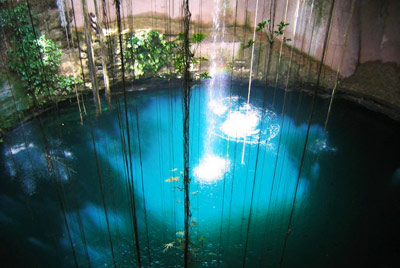 The rumbling caught my attention first. My travel group was waiting for our bus in the lobby of our hotel in the city of Merida in Yucatan, Mexico when I realized I was in trouble. I excused myself with my roommate to go to the bathroom in the room we had just vacated. Like a fool, I let her go first and was forced to clench my stomach to keep in whatever wanted to spill out. The rumbling and gurgling became so unbearable that I rushed to the bathroom door where my roommate was quietly living out her own Montezuma-induced nightmare, banging like a wild woman and hollering for her to let me in. I didn’t care if I would have to go in the bathtub – I was going. I … went. There’s no way to describe what I felt as I stood in my own filth in a lovely hotel, knowing I would have to explain myself to our chaperones, but I hope that you’ll trust me when I say this all ends well.

The summer before my Junior year of high school was lit. I don’t know what came over my parents, but they allowed me to go to NYC with the school choir group, then I got to do a tour of the Yucatan Peninsula in Mexico. (The fact that my parents have never let me forget it might be the biggest motivating factor behind their agreement, but that’s not the point.) That summer became the biggest adventure I had ever experienced. I got my first passport, learned about travel insurance, and got exciting vaccinations.

The tour was led by my two amazing teachers – Senora Campos and Senora Williams – who loved calling us by our middle names anytime we acted out. They handled the madness like only teachers can. Our luggage was lost, we were grounded due to a HURRICANE, then arrived at our hotel in Cancun with no more than the clothes on our backs, whatever we had in our carry-ons, plus the things we were able to buy at a Wal-Mart in country. I ran through the aisles snatching up what my 16-year-old mind thought the most important: candy, underwear, a bright blue hat, Tweety Bird boxers and a tank top. I’m sure you can imagine the stares. My mom was so terrified by the weather and radio silence from us that she called our hotel no less than 45 million times before I was able to assure her I was, in fact, alive.

We hit the ground running the next day, taking off for the ruins of Chicen Itza under the supervision of our tour guide Sergio and driver Luis. Now, when I say it was impressive I’m almost underselling the grandeur of what we got to see. The pyramids touched the clouds, built up on blocks as big as me. The intricate carvings and forms felt like they had been created out of time and beyond the means of humans. It was absolutely awe-inspiring. We got to stay that night for a light show, where we made friends with a Canadian family that made fun of the Tweety Bird boxer shorts in good spirit. I was too high on the experience to be ashamed of my appearance, which was a strange kind of bliss.

Our bags arrived on our second full day, thankfully, enabling us to look and smell like half-way normal people once again. After cleaning up and tucking my new favorite pair of boxer shorts into a dirty clothes bag, I was ready for the next journey. We ventured away from Chichen Itza for the afternoon to see a cenote, where my life officially changed. Cenotes are a natural pit, or sinkhole, that forms a well. The one we went to was somewhat unsuspecting to a kid like me from Kansas. I thought maybe we’d taken a wrong turn somewhere. Maybe it would just be a puddle or a regular old well with rocks and twigs at the bottom, I thought. We descended a walkway carved into the earth to find a beautiful sight I’ll not soon forget. Light streamed in from holes in the roof and bounced from lamps to reveal hanging vines as thick as my arms dropping down into a blue-green pool with no bottom in sight. There was an island of rocks people were swimming back and forth from. You could walk down the stairs to a safe platform, or you could jump. I wanted in every part of my body to keep walking, but there was a voice urging me to jump. I was so possessed by that other voice, maybe a part still undiscovered, that I stepped to the edge of the rock staircase.

“Oh, LaKase is gonna do it!” I remember Senora Williams saying with a hint of pride.

Before I could think with the reasonable part of my brain, I jumped. I still remember the rush of the water enveloping me in cool silence. I sank down into the black water, time traveling through that peaceful presence into a space long gone,then bobbed back up to the cheers of my little family. I was proud of the leap, and relieved I was still on Earth instead of gone forever. The rest joined me in the dark water to laugh and swim like the children we still were despite our best efforts to exemplify maturity in our normal lives. We dove down to touch the bottom, but were instead met by a void. It could have been the perfect setting for a horror movie, yet in my mind’s eye it was the purest, safest and most free I have ever felt. I didn’t know the water had filled me up with something that would literally destroy my pants, cramp my body and render me immobile in a van for hours, and I am better now for it.

Flash-forward to the hotel room. My roommate – bless her – was kind enough to not laugh at me in that awful state. She ran and got my bags for me to change and notified the adults that I was sick. What’s even more remarkable for a gaggle of kids is that no one mocked me. Everyone was supportive and understanding. I was better a day or two later, but since then I’ve never played around with going to the restroom.

At 16 I learned that with good sometimes there’s bad, albeit in a very amusing way. Now, at 31, I am re-learning how to take a chance. I’ve discovered taking a chance does not mean ignoring risk. Being brave is just as much about knowing when to walk away as knowing when to act. There’s nothing wrong with fear. There’s nothing wrong with turning back when you’ve gone as far as you can. Bravery is a small thing. It’s a mother letting her child go. It’s jumping so others won’t be afraid anymore. It’s kindness when you really want to be petty. You never know you’re in those moments until much later. When I’m afraid, or sad, or too low to believe the sun still rises I find myself remembering the cenote and the peace of mind that came in the water.

3 Replies to “The Beauty of Taking a Chance”